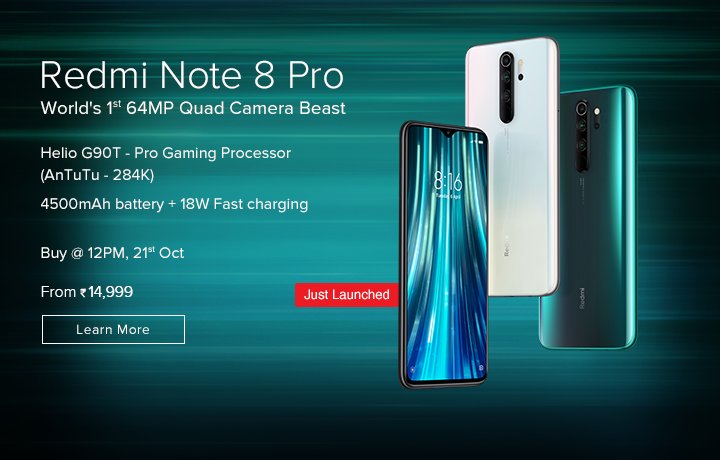 As for price, the Redmi Note 8 Pro India price tag is not known yet, but it should be close to the China pricing range. To recall, the Redmi Note 8 Pro will retail starting at CNY 1,399 (roughly Rs. 14,000) for its base variant with 6GB of RAM and 64GB of onboard storage. The 6GB + 128GB and 8GB + 128GB models have been priced at CNY 1,599 (roughly Rs. 16,000) and CNY 1,799 (roughly Rs. 18,000), respectively.Redmi Note 8 Pro specificationsRedmi Note 8 Pro supports dual-SIM, runs on Android Pie based MIUI 10, packs a 6.53-inch full-HD+ (1080x2340 pixels) screen, and is powered by MediaTek's new gaming-focussed MediaTek Helio G90T SoC, paired with up to 8GB of RAM. Xiaomi has also added liquid cooling support in the smartphone to improve the gaming experience for the Redmi Note 8 Pro users. Other gaming-centric features in the phone include the Game Turbo 2.0 mode. The company will also be selling a game controller for the phone.The Pro variant is the company's first phone with a 64-megapixel main camera. The main shooter is joined by the same camera setup as the Redmi Note 8 – 8-megapixel wide-angle shooter and two 2-megapixel cameras. On the front, there is a 20-megapixel selfie camera on board. It packs a 4,500mAh battery with support for 18W fast charging, NFC, USB Type-C port, 3.5mm audio jack, IR blaster. The Redmi Note 8 Pro smartphone is also IP52 certified.Redmi Note 8 ProXiaomi took the wraps off the Redmi Note 8 and the Redmi Note 8 Pro in China on August 29, once again bringing killer devices to the budget segment. Successors to the extremely popular Redmi Note 7 series, the phones will come to India after 8 weeks, which is in the end of October.Update (October 9, 2019): Xiaomi India has announced that the Redmi Note 8 series will come to India on October 16.We have received about 64 Million queries from an infinite number of Mi fans for this. 🤩Here's announcing the launch date of this beast of a phone. #64MPQuadCamBeast is coming on 16th October 2019. Can we get 6400 RTs on this? pic.twitter.com/mcvWwfJ26lOctober 9, 2019Xiaomi has also managed to ship over 20 million units of the Redmi Note 7 series globally which is a feat in itself. We found the Redmi Note 7 Pro to be Xiaomi's most refreshing upgrade to the lineup in a long time, as we noted in our review. The Note 7 series set a benchmark in the smartphone markets around the world and it's up to Xiaomi now to one up themselves.The mobile phone turf has seen a lot of developments in the past quarter or so with consumers eyeing features like pop-up camera, in-display fingerprint sensor and multiple cameras under various budget segments.Having said that, Redmi Note series is a pretty important lineup for the Chinese electronics maker which is why it is doubling down on making the phones feature rich.Cut to the chaseWhat is it? Xiaomi Redmi Note 8 seriesWhen is it out? 16 October 2019What will it cost? sub-Rs 10,000 for Redmi Note 8 (expected)

Stay connected with www.ehubinfo.com for latest updates
Important: Please always Check and Confirm the above details with the official website and Advertisement / Notification.
Tag : Education, Mobile