Ehubinfo » Education » Talking on mobile will be expensive starting Sunday

Talking on mobile will be expensive starting Sunday 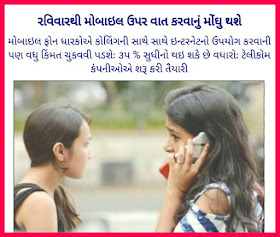 Mobile phone holders will have to pay higher cost of calling as well as using the Internet: may increase by up to 5%: Telecom companies have started preparation
In this period of economic recession, the burden is on the people. The debt burden of telecom companies that are facing financial problems is now falling directly on mobile phone customers. For mobile phone users, using the internet from December 1, it will be costly to use the internet, ie the tariff plan is going to be expensive.
Bharti Airtel and Vodafone Idea are going to increase their tariff plan from December 1. Both companies are planning to do the same for Kennedy Lucky to pay the hefty balance of Adjusted Gross Revenue (AGR). However, the two companies are still not sure how much they will raise the tariff, according to Economics Times report Kanidai Lakia, which said that Aquila could increase its tariffs by up to 5 percent. Mobile company Bharati Airtel says more investment is needed to introduce new Kannada locking techniques in the telephone sector. That is why tariffs will be increased. According to Aquila, Airtel's 4 rupees recharge will be reduced to Rs 5, but it is hoped that the cost of recharge will not be increased but some services (voice call, message, data) will be reduced but this will be reduced. The picture will be clear in a couple of days. On the other hand, Vodafone Idea Limited, which is facing financial crisis, said that it will increase tariffs which will become effective from December 1 onwards. Experts in the telecom conidai lakiye sector say that the debt burden on telecom companies has increased since the Supreme Court verdict in the six-year-old AR case. The Supreme Court has ruled against mobile companies in the AGR case. Those companies have to pay huge sums of money to the government, so the companies want to raise the tariff, and if the companies increase tariffs by 5%, they are expected to receive Rs.
Talking on mobile will be expensive starting Sunday
Gujarati News by Akila news
click here to Read