Corona vaccine: Vaccine testing on two patients for trial in the UK

- April 28, 2020
Corona vaccine: Vaccine testing on two patients for trial in the UK 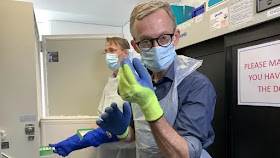 The first human coronavirus vaccine trial in Europe has begun in Oxford.
Two volunteers were ready to be vaccinated.  Of the 800 people selected for the vaccine study, these are the first two to be vaccinated.
Half of those selected will be vaccinated with the Covid-19 vaccine, while half will be vaccinated against meningitis, not against corona.
The method of testing is determined in such a way that doctors know who has been vaccinated, but volunteers do not know which of the two vaccines they have been given.
Alyssa Granato, one of the first two volunteers, told the BBC: "I'm a scientist, so I wanted to help with scientific testing wherever possible."
A team from Oxford University has developed the vaccine in just three months.
Pre-clinical research has been conducted under the direction of Sarah Gilbert, professor of vaccineology at the Jenner Institute.
“Personally I am very confident that this vaccine will work,” says Sarah.
"Of course, we have to test it and get its results from humans. We have to show that it really works and prevents coronary heart disease. Only then can it be used in public."
Professor Gilbert had earlier said he was "80% confident" but did not want to talk about that percentage anymore.  Suffice it to say that the vaccine is “very optimistic” for it to be useful.
More extensive trials will be conducted in the coming months with about 5,000 volunteers, including testing without any age limit.
Scientists hope to start 1 million doses before September and then increase the productivity on a large scale if the vaccine proves effective.
Read in Gujarati: Click here