Ehubinfo » Corona update » Government for farmers, this purchase will start from 1st May

Government for farmers, this purchase will start from 1st May

Government for farmers, this purchase will start from 1st May

In Gujarat, Chief Minister Vijay Rupani held a meeting with his cabinet to discuss the purchase of tur, rye and chickpeas from farmers from May 1. 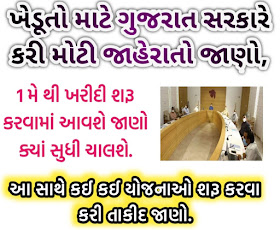 Apart from this, he also held discussions with the district collectors to make arrangements so that public life and especially farmers would not face any problem after the opening of the lockdown.  This information was given by CMO Secretary Ashwini Kumar in a digital press conference.
The purchase of Tuwer will start from May
Purchases will begin May 1 through May 5
Gujcomasol will start buying chickpeas and rye from May 1
The CMO secretary said there is good news for farmers.
Tuwer will be purchased from the supply department from May 1 to 5.  A period of 90 days was fixed for this purchase.  Online registration was to be done from December 1 to January 15 in which 16,345 farmers registered.  Out of which 3881, 6514 metric tons of tur was sold.  The purchase of tuwer will resume on 103 godowns when 12467 farmers are left behind.  Purchases will begin May 1 through May 5.
It will also be necessary to follow all other rules with social distance regarding the purchase of chickpeas and rye from Gujkomosol from May.  Adequate drinking water available in the state, no problem of drinking water in summer, damaged hand pumps will be repaired and turned on
Notice given to District Collectors
District Collectors have been instructed to start work under MNREGA expeditiously.  Collectors have been instructed to dig the soil of the check dam and lake.  It has also been urged that all these operations be started expeditiously.
Urgent to start any plans
Sujalam Sufalam scheme should be started soon
Work will also be started under MNREGA
Work under Pradhan Mantri Awas Yojana will be started soon.
Two and a half lakh kits were distributed in Kutch.  NFSA cardholders, BPL family has been given an additional Rs.