Ehubinfo » Corona update » Win! / Goa became the first state in the country, Where all the patients with corona virus were recovered

Win! / Goa became the first state in the country, Where all the patients with corona virus were recovered

Win!  / Goa became the first state in the country, Where all the patients with corona virus were recovered 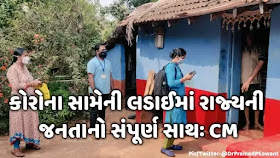 With the Corona virus where the country's momentum has stalled, news has come of a relief.  On Sunday, the Indian state of Goa has brought new achievements to Goa.  Here all the patients with the corona virus are healed.  There were a total of seven cases of coronas in the state, six of which were already cured.  Finally, he was discharged from the hospital after the corona report of the patients came out negative.
The people of all faiths of Goa got rich support "We are in a small state but we have a lot of tourist footfall there," Chief Minister Pramod Sawant told a news channel.  The Goa people also got a lot of support along with the police, the local system, the tourist department.  The people here followed all the advice of Prime Minister Narendra Modi.  There were so many festivals here, but no one of any religion raised any problem and the religious leaders got a lot of support. "We should follow the target line of the lockdown that the Prime Minister has drawn by May 3," he said.  In Goa, some exemptions may be allowed according to the rules.  We'll get to that. The first positive patient was found on March 18 The Corona virus was started on March 18 in Goa, the first infection seen in a leader returning from Dubai.  Up to April 3, there were 7 coronary patients found.  Since then no new case has come up in the state.  By April 15, six coronary-positive patients in the state had recovered.  The Corona test report of one survivor patient came out negative on Sunday. Clear the way to become the country's first green zone state
In that way, Goa has now cleared the way to become the country's first green zone state.  Earlier, senior BJP leader BL Santosh also tweeted that Goa would become the first state in the country to be included in the green zone by April 20, if all goes according to the government's plan. Central Goa has already been declared a green zone in the southern Goa district of the state.  In cases where Covid 19 cases are not covered, they can be declared a green zone and some concessions can be made.