Ehubinfo » SARKARI YOJANA » The government has canceled 3 crore ration cards due to this, have you not got it

The government has canceled 3 crore ration cards due to this, have you not got it

Aadhaar and ration card linking is required," a statement from the government said. So the ration card has been canceled. Apart from that, foodgrains and other goods are being taken from the government scheme for free by making fake ration cards. These ration cards have also been canceled. A total of 800 million people in the country have ration cards. This initiative is largely considered important for the welfare of many migrant beneficiaries such as laborers, day laborers, blue-collar workers etc. Who often change their place of residence in search of employment across the country

●What to do now
If the ration card is canceled, you have to go to your food supply department and get the information. Where he shows his ration card and Aadhaar card. The Aadhaar number has been genderized with the ration card. Then your new ration card will be made and the old one will continue. 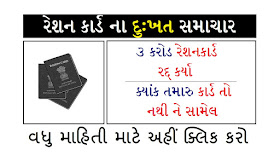