Exercise to Reduce Courses By 20% If Schools Start In September, 30% in October and 40% in November

Exercise to Reduce Courses By 20% If Schools Start In September, 30% in October and 40% in November

Amidst the uncertainty, different formulas are being formulated by the Board of Secondary Education and the Department of Education 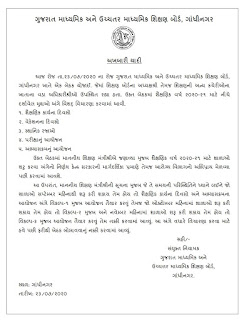 The dilemma of school administrators in addition to the state's more than 1.50 crore students and parentsMore than 1.50 crore students have been suspended due to closure of schools in the state. At that time, the state education department and the secondary education board have started considering how to keep the curriculum if the schools start after August. In the primary phase, if the schools start in September, 20%, if they start in October, 30% and if they start in November, 40% of the courses have been reduced.Discussion on option 3 was consideredGujarat Board's primary, secondary and higher secondary courses may be reduced by 20 to 40 per cent. In the meeting of the officers of Gujarat Secondary and Higher Secondary Education Board at Gandhinagar, the issue of 3 different options for reopening schools was discussed.
A mid-term vacation that has to be cut if it starts in November
The government formed a special committee to prepare for the academic yearThe Gujarat government had constituted a special committee on preparations for the coming academic year, as part of which a meeting was held in the presence of the Chairman of the Board of Secondary Education and officials of the state education department to discuss the issue of holding examinations next year. The matter is still under discussion and a report will be prepared.Important Link:-Read News In Gujarati : Click Here
The GCERT of the primary school and the board of the secondary-higher secondary school determine the curriculum.The curriculum of primary schools (GCERT) is decided by the Gujarat Council of Educational Research and Training. While the curriculum is determined by the Board of Secondary and Higher Secondary Education.
Education