The Met department has predicted "heavy to very heavy rains at isolated places" in different parts of the state during the next three days. 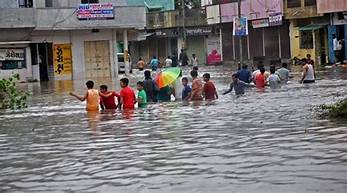 Seven people were killed in rain-related incidents in Gujarat in the last two days as intense spells caused flooding and water-logging, prompting the government to deploy 13 teams of the National Disaster Response Force in the state, officials said on Monday.
Widespread rains lashed many areas in the state in the day, with Mandvi taluka in Surat receiving 249 mm of downpour between 6 am and 6 pm.
The Met department has predicted "heavy to very heavy rains at isolated places" in different parts of the state during the next three days.
"Seven persons have died in various rain-related incidents in Gujarat on August 15 and 16. We have deployed 13 teams of the NDRF to tackle any emergency situation," relief commissioner Harshad Patel told reporters in Gandhinagar.
Heavy rains prompted authorities to suspend traffic on 195 roads, including 16 state highways, during the day, a government release said.
Dolvan in Tapi district received 205 mm rainfall, followed by Talala in Gir-Somnath (180 mm), Valod in Tapi (156 mm), Vansda in Navsari (155 mm), Waghai in Dang (135 mm), Mahuva in Surat (132 mm), Vyara in Tapi (114 mm) and Jodia in Jamnagar (110 mm), the release said.
Press Note Read  Click here
Rains also lashed parts of arid Kutch district, including Mandvi (133 mm) and Mundra (132 mm), it said.
The fresh spell of rains has lifted water stocks in several dams. Gujarat has so far received 79.44 per cent of its average annual rainfall, the release said.